Manganese is required in very small quantities, found in enzymes used in photosynthesis and in the production of a plant hormone called auxin. Plants use this nutrient to remove hydrogen peroxide from within cells.

Iron toxicity can indicate manganese deficiency, which will show on new growth with the leaf margins becoming paler to yellow with the veins remaining green, with dead or dying lesions spotted across them. Distinctive sunken white areas start to appear.

To correct a deficiency

Toxicity will show up on the older leaves first, which will have pale green/yellow areas between the veins which turn red-brown. Purple spots can be seen on the petioles, stems and the leaf underside veins. Excessive manganese can cause iron deficiency.

Soil testing is an important activity for a successful garden. Soil stewardship is an ongoing process, where you test and amend, grow some stuff, then test, amend and grow some stuff….and so on. Focus on building soil tilth so it can really hold and make available to the plants all the important nutrients. You do this in part by adding compost, manure, rock dust, bone meal, kelp & fish emulsions. Read this article series to learn more about each of the 13 key nutrients for your garden.

This site uses Akismet to reduce spam. Learn how your comment data is processed. 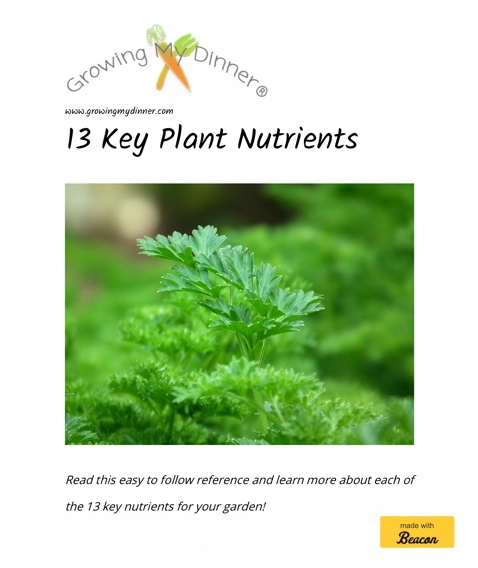 Lori Wardell is the writer, grower and cook for the Growing My Dinner blog and just for fun ghost writes the Cat-Shaped Monster blog. She spends her time tending her farm and gardens, cooking and preserving and enjoying what she grows, while caring for her assorted animal friends and writing about the whole lot. Contact Lori on Twitter @GrowingMyDinner
Shop Ball® and Kerr® products at FreshPreserving.com